The Villas at Mirador Gets Green Light 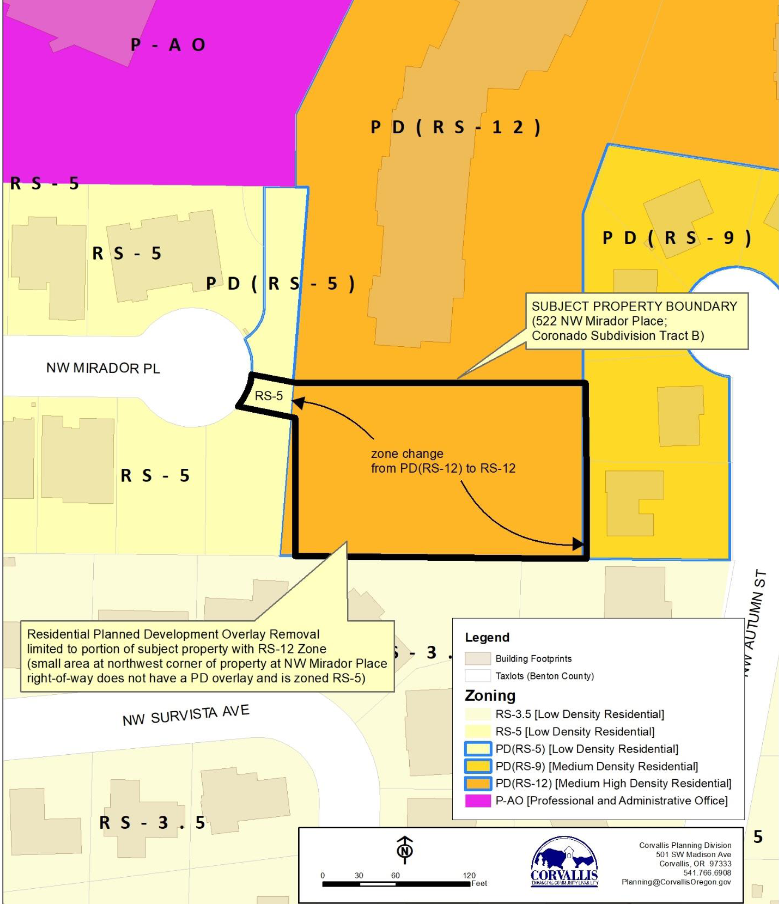 With little to no discussion or fanfare, the Corvallis City Council unanimously voted to remove previous zoning restrictions in order to move forward with a proposed housing development for a project with a sordid history.

At their meeting on Monday, Jan. 3, the Council approved the removal of the city’s “planned development overlay” for a proposed lot at 522 NW Mirador Place to build a housing development dubbed the Villas at Mirador. Group B LLC, based in Salem, has been working to develop a 10-unit apartment complex on the proposed property since 2013.

The purpose of the Planned Development Overlay is to establish a process for consideration of areas of proposed developments specifically in areas that require special planning around areas with natural features and other environmental considerations or concerns.

The property, which totals approximately 0.81 acres, has an interesting history. In 2014, the property owner applied for a Detailed Development Plan to construct a 10-unit apartment building. Following Planning Commission and City Council decisions that resulted in denial of the requested Detailed Development Plan, the property owner appealed the City Council’s decision to the Oregon Land Use Board of Appeals (LUBA).

In 2016, LUBA reversed the City Council’s decision on the application. The City appealed LUBA’s decision to the Court of Appeals, which affirmed LUBA’s decision without providing a written opinion, according to documents provided to the council.

The city petitioned the Oregon Supreme Court to review the decisions, which the court declined.

LUBA’s reversal decision became final, and jurisdiction returned to the city, resulting in a limited public hearing for the City Council to consider LUBA’s decision. This ultimately led to City Council’s approval of the 2014 Detailed Development Plan request.

This recent decision made by the council will allow for Group B LLC to move forward with the development project with limited to no interference.