Moss: The Good, the Bad, the Beautiful 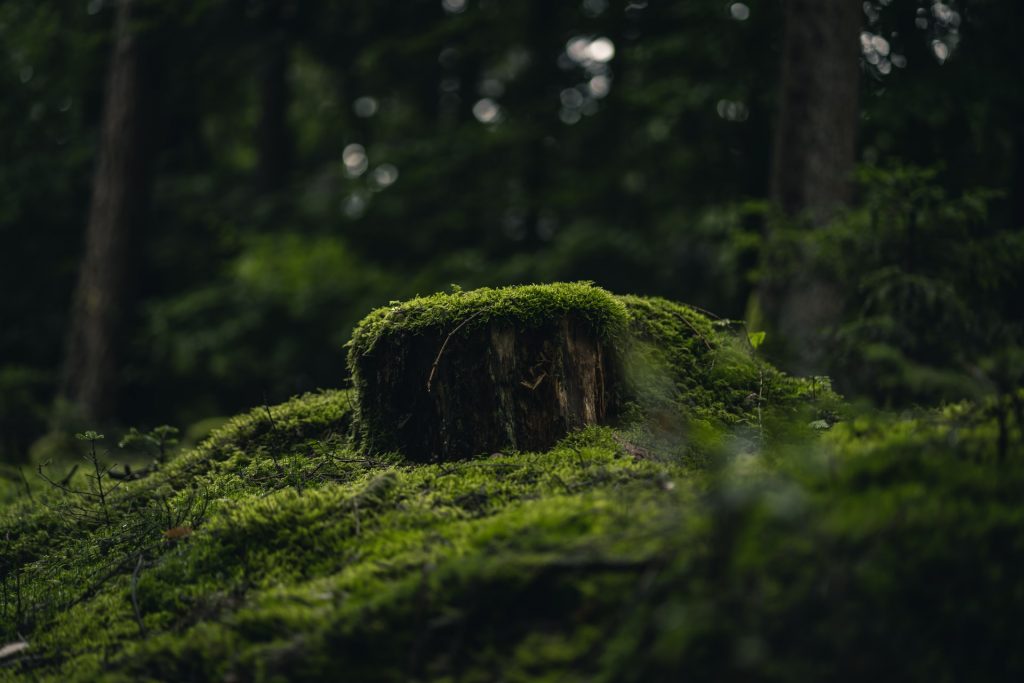 The world of moss is interesting, diverse and ever-present, even if we don’t always notice it. Most often in urban environments, moss is seen as a weed and a nuisance, but perhaps it won’t seem so after getting to know the strange little plant.

A Brief Review in Biology

Contrary to what one may guess based on its behavior and growth pattern, moss is purely and truly a plant. Unlike fungi, which also prefer moist, shady environments, moss does not digest other organisms for nutrients. Instead, it gets everything it needs from photosynthesis or by absorbing nutrients from its environment. In essence, moss is more closely related to the tree it’s growing on than the bracket fungus growing next to it.

That being said, moss is unique among plants in several ways.

Moss doesn’t have fruits or seeds, but grows fruiting bodies on stalks called sporophytes. Unlike other plants, moss spores, analogous to pollen, actually swim almost like sperm in animals. Because of this, moss can only reproduce when saturated with water.

Another important structure moss lacks is roots. Moss can grow pretty much anywhere because it has only a very simple structure called the rhizoid, which serves as an anchor to the plant’s substrate. The rhizoid does not dig deep, and sometimes does not even gather nutrients from the soil like other plants’ roots do.

Moss is also one of the oldest terrestrial plants on earth, and from its simplicity, it’s not hard to see why.

There are several reasons many people dislike moss, which can loosely be categorized based on the environment of the undesired plant.

In lawns, most people don’t like moss because it makes the yard look uneven in color, or perhaps they think it will somehow harm or suppress their turf grass. The latter is untrue. According to Oregon State University Professor of Botany and Plant Pathology Dr. Bruce McCune, turf grasses “can easily outcompete moss.”

“If your lawn has a lot of moss in it, the moss is there because the grass is doing poorly, not the other way around,” said McCune.

OSU turf grass specialist Alec Kowalewski echoed McCune on this point, saying in a publication that “there’s a misconception that once moss is killed, it won’t come back. It will, if you don’t change the environment.”

In the article, Kowalewski offers solutions to this, like thinning or removing shade trees and fertilizing the lawn. McCune, on the other hand, suggests just letting the moss grow, as it’s doing no harm and thriving in the environment anyway.

On walkways, sidewalks, garden paths and porch steps, moss can grow where many vascular plants, or plants with roots, can rarely if ever survive. Some people are bothered by this for aesthetic reasons, preferring tidy concrete and smooth, finished surfaces. But there can also be a practical concern: slipping.

McCune referred to moss as “like a sponge,” since by its nature it has the capacity to hold a lot of water. One downside to this is that moss can sometimes — more or less so with differently textured moss — create slippery surfaces after a lot of rain. As such, this is one of the few cases in which McCune recommended moss be removed from an environment.

Even in this case, if the moss doesn’t necessarily cause an extreme slip hazard, leaving it in place would be fine. If removal seems like the right step, McCune recommended simply lifting up the moss rather than using any chemical herbicide, arguing that such a step is unnecessary.

The final and perhaps most extreme environment in which people dislike moss is on rooftops. Many people — homeowners, construction companies and roofing experts alike — claim that too much moss on rooftops can damage the roof.

According to contractor Tom Silva of This Old House, moss shortens the lifetime of the roof because it holds water against it. Silva warns that the water will soak into the wooden sheeting, which could cause it to rot. However McCune pushed back against this idea.

“Most people, roofers included, simply see moss on a roof and assume that damage is happening,” McCune said. “But most rooftops — asphalt shingles or metal roofs — they’re totally impervious to water. Having a wet sponge sitting on a shingled roof makes no difference, because the water won’t go underneath the shingles. That’s how roofs are designed.”

According to McCune, the growth of a vascular plant on the roof would be a different question. The roots of vascular plants will expand under the shingles and into the structure of the house, causing damage and the risk of leaks.

McCune said the only concerns he has about mossy rooftops are the slight threat moss would pose to an entirely wooden roof — i.e., not traditionally shingled — by holding water against it, or if the moss were in a gutter, drainage ditch, vent, or skylight. “Moss, like any other matter such as leaf litter,” said McCune, “is going to cause problems if it blocks drainage on your roof.”

In the end though, if you’d prefer moss off your roof, Silva and McCune agreed on one thing: a mechanical or preventative solution beats harsh chemicals or extreme force when removing moss. To prevent the growth of moss, mold, and lichen on rooftops, Silva recommends using a strip of zinc, copper or lead. The metal creates a suboptimal pH environment for the organisms.

In terms of moss breaking cement, roofs and decks, moss does not actively deteriorate its substrate like fungi and mold do.

“Mosses are non-aggressive in terms of decomposing,” said McCune. “It’s just not their lifestyle.”

Learning to Love and Cultivate Moss

This plant is ancient. Throughout history it has been used by many cultures in many different ways — including as carpet, insulation, diapers, and bandages. Moss was even frequently used to dress wounds during World War I, as European Sphagnum moss not only absorbs liquid well, but also has antiseptic properties due to its regulation of pH.

In addition to being functional, moss has great, often overlooked aesthetic value. In a video introducing his research, McCune said he was initially drawn to moss by its beauty, and describes mosses and lichens as the “intricate details” in the tapestry of plant biodiversity.

When asked about how to learn to appreciate moss, McCune said, “It’s really about interacting with them on their scale. When you get down to that scale, the beauty is obvious.” He conjured a striking image to this point, raising the hypothetical of this unique plant at a larger scale. “If you were to walk into a room and see moss as big as you were, you would be amazed! You’ve never seen a plant like that.”

Embodying this appreciation of moss’ inherent beauty, recently the trend in some internet circles has been to grow moss with intention. According to McCune, it’s hard to go wrong in such an endeavor. “If you grow local and native mosses,” he said, “they’re used to dry summers. It’s a plant you won’t need to weed, water or fertilize at all.”

By contrast, one article argues that some mosses will benefit from watering and fertilizing early on. The consensus, though, is that mosses are much easier to care for than most plants or turf grasses.

According to McCune, there are no varieties of moss to his knowledge that are toxic, either to humans or animals. So although the plant isn’t very nutritious, it is no more harmful to your dog or baby than grass would be. The only possible concern of a dog or cat in a moss garden is that, because of their shallow rhizoid “roots,” mosses aren’t quite as hardy as vascular plants in the face of being dug up.

Of course, these growing and watering tips only work easily outdoors. But online, there are plenty of ideas for growing moss gardens both indoors and out.

With no natural precipitation and no preexisting soil or nutrients in the air, there are a few more steps to grow moss indoors. The YouTube channel SerpaDesign offers tips for growing thriving mossy terrariums, greenhouses, and artistic fixtures.

Whether you intend to grow moss around your home or just to appreciate all the moss growing everywhere from the sidewalk to the forest, try to look closer the next time you see it. Perhaps you will find in the moss what McCune describes as a “complex, intricate miniature world.”

For more locally centered information and details about mosses, from ecology to human interaction, check out Oregon State University’s bryophytes page. The page was created by OSU students in 2000 and is presently managed by Dr. Bruce McCune — an ecologist who, interestingly, has a fungal genus named after him.