As the Crow Reads: M-Theory 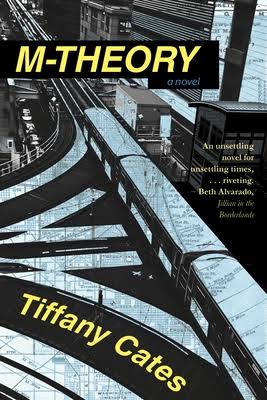 Murder mystery meets romance meets thriller in a new novel out this year by Corvallis-based author Tiffany Cates. M-Theory is at once puzzling and simple, disturbing and lovely, a true work of literary genius. As someone who normally doesn’t love stories with a fear factor, I found M-Theory both entertaining and thought-provoking as it grappled with the definitions of love, relationship, crime and intent.

M-Theory is made up of several story lines, all converging around a young artist named Emily Monroe and her complicated relationship with high school teacher Donovan James. Both with complicated pasts, the unlikely pair depart on a twisting and dangerous path that eventually leads to consequences much bigger than themselves, involving a detective, a pedophilia ring, and the church. When all goes up in flames, only the strong and the smart are left standing.

If you’ve been reading my reviews, by now you’ve figured out that I love a book that faces real life and raw situations from a point of honesty, and that doesn’t sugarcoat the issues facing the characters. I was impressed by the way the characters were written, particularly that of the protagonist. I liked that the perspectives given were believable, and that the actions of the characters were more complex than just surface deep. I enjoy characters that make me root for them, and I love when a character tricks me into believing one thing about themselves, but then reveals a different way of being altogether.

I’m not normally a person who enjoys crime novels, but I was pleasantly surprised by the way Cates crafted this book to appeal to more than just one audience. I enjoyed the fact that this story kept me guessing, giving me the ending long before revealing the path taken by the characters to get there. I enjoyed the amount of thought and creativity Cates brought to the connections and relationships in the story. It’s an unsettling reminder of how the relationships in our own lives can be so easily affected by the simple choices and decisions we make every day.

The ending of the book could easily be described as a cliff-hanger, but I would disagree. I loved the way the book ended, leaving the reader fully aware of what would follow for the main character, without needing to fully describe it. It had a much deeper impact on me than it would have had the author chosen to include more.

Because there was so much happening in this story, I could definitely have used a bit more development for the supporting characters in this story. It was sometimes unclear what the relationships were between all of them and how they all related back to the main characters. This book could arguably be significantly longer, to include all of these details and to further understand the connections between the characters. At times I found myself rereading to try to grasp the sheer number of characters and how they were all related.

I would recommend this book to those who love a good puzzle. I spent hours trying to piece together the whole picture, and I would need to reread this book to fully understand all of the intricacies woven into the story line. This book would be great for a long vacation on a beach, where the reader has plenty of time to work through the maze of characters to find truth. I would also recommend this book to lovers of true crime; while it is not a true story, I believe it has all of the details and complications to make it incredibly worthwhile to those who enjoy that genre.

Tiffany Cates earned her MFA in Creative Writing from Oregon State University. She also possesses degrees in philosophy and psychology, both of which heavily influence her writing. She currently lives in Corvallis, and is the founding editor of Townsend, a literary journal that displays and encourages the work of long-form fiction writers.

M-Theory  was published in 2021 by Baobab Press.

M-Theory is available at Grass Roots Books & Music in Corvallis and online.