Ballot Measure Would Limit Self-Checkout to Two Stations Per Store 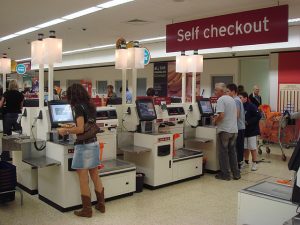 Most Oregonians don’t pump their own gas, and if a planned measure for the 2020 ballot is successful, they mostly won’t have to self-checkout after grocery shopping, either.

On Thursday, Oregon’s AFL-CIO, a federation of unions in the state, submitted a petition to the Attorney General to put the matter on next year’s ballot. If the  The Grocery Store Service and Community Protection Act passes, Oregon stores would be limited to two self-checkout stations per store.

“The widescale use of self-checkout machines in our state’s grocery stores is part of a deliberate corporate strategy that relies on automation to reduce labor costs and eliminate jobs,” Oregon AFL-CIO President Tom Chamberlain said in a statement.

The filing with the state cites other arguments against the automated options at stores: Social isolation, teens that use the self-checkouts to buy alcohol, disabled or elderly that may find the self-checkout problematic, and disproportionate impact on minorities, the filing maintains, are more likely to hold cashier positions than other jobs within stores.

“Because people of color are overrepresented in cashier position, which is the lowest paid position in retail businesses, the increasing use of self-service checkouts has a disproportionate negative impact on people of color,” states the act.

The Oregon Bureau of Labor and Industries would be responsible for enforcement if voters pass the act.

The AFL-CIO petition comes shortly after an August 24 vote by Oregon and Southwest Washington grocery workers to authorize a strike. Wages and other compensation are the main sticking points.

According to reporting from Willamette Week, the president of the NW Grocery Association says the initiative petition is a tactic aimed at pressuring concessions from Fred Meyer and other large grocers.

“I think it’s a bargaining tactic,” Joe Gilliam told Willamette Week.  He also said that if the AFL-CIO gets the petition on the ballot, the grocers will spend to fight it.

“It doesn’t seem like the kind of issue you’d take to the ballot,” he says. “It’s not like PERS or tax reform. People vote every day in the way they shop—using their smart phone or going through check-out.”

Tom Chamberlin, president of the Oregon AFL-CIO, told Willamette Week, the measure and the possible strike are not linked. “This is a response to the rapid expansion of self-checkout in the state,” he said. He also added that other states are looking at how automation is effecting their workforces, but Oregon isn’t.

The union will need about 112,000 signatures to get the measure on next year’s ballot.