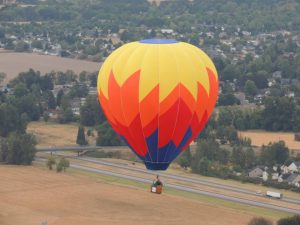 Have you ever wanted to float away in a hot air balloon? For local pilot and long-time HP employee Mark Trujillo, hot air ballooning is not just a hobby, it is an obsession. After more than a decade ballooning, Trujillo can tell you all you need to know about floating through the clouds. If you’re lucky, he might let you climb in his basket.

For Trujillo, it all began one day while filling up gas at the Arco in Albany. There he spotted a giant hot air balloon basket in a trailer next to him. He inquired about the curious thing to the man pulling the trailer. That man, Alan Sanderson, asked Trujillo if he would be interested in taking a ride. Not only was Mr. Sanderson an enthusiast, he was a pilot, instructor, and dealer of hot air balloons locally—a hot air balloon pusherman, so to speak.

Since that fateful day, Trujillo has been hooked. But no worries, it is all legal.

In fact, Trujillo is now a fully licensed hot air balloon pilot and instructor himself after more than a decade floating the friendly skies. He also is an airplane pilot and member of the Civil Air Patrol, but ballooning is his real fix. Growing up in Albuquerque, New Mexico—the ballooning capital of the world—Trujillo wanted to pilot since he was a kid.

Hot air balloons are unique in several respects. One is that they require a crew of people to make the magic happen. Usually a ground crew of 3 to 4 people is required to lift the 500-pound basket and 300-pound balloon off the trailer. For launching, two people are needed to hold the mouth open, one at the crown line and one operating the fan. Once the burner is lit, the 2.7 million BTUs of propane lift the balloon. From there, a ground crew follows the balloon to its landing. In this case, Trujillo’s wife is his crew chief.

Another reality of ballooning is that cooperation with landowners is critical. Balloons need a place to safely land and preferably in large, clear expanses such as fields or pastures. Trujillo says that landowners in the Mid-Willamette Valley are extremely cooperative and landings are relatively easy because of the low density of development in the state. In ballooning, you land where the wind takes you.

Because hot air balloons require optimal conditions of light winds and no rain, Trujillo and his crew have to patiently wait until June to kick off their shenanigans. They balloon every weekend from Father’s Day to mid-September when it is mostly dry. Wind and rain can be exponentially more challenging for ballooners than airplane pilots, so Trujillo follows the weather closely and he says that good pilots are usually experts in micrometeorology.

Hot air balloons are equipped with an altimeter, temperature and fuel gauges, and a variometer that measures the balloon’s rate of climb or descent. Forty gallons of propane is enough to keep the balloon aloft for several hours while 30 to 60 seconds of periodic hot air from firing the burner keep the balloon from falling. The typical balloon has a 600-pound payload, allowing the basket to carry 2-3 adults per trip. Each balloon is also equipped with a parachute and rope that allows for more rapid descent. Aside from that, you let the wind steer you.

One of the more interesting facts about balloons is that it is perfectly normal for balloons to run into each other. When balloons touch, it is appropriately called kissing. Floating on top of each other can be potentially dangerous, but the balloon underneath always has right-of-way.

It is also very easy to talk to one another between balloons and especially from the balloon to people on the ground, even at 200 feet above. Trujillo says the highest he has ballooned is a whopping 10,000 feet, but the ideal elevation is 1000 feet, where you have a better connection and perspective to the land below.

So the question everyone probably has…how do you get in one of these suckers? Well, it is fairly popular and quite an undertaking for crew members, so volunteering on a ground crew is one way to work your way into the basket à la old-fashioned sweat equity. However, if you are not particularly frugal and have an immediate need for action there are several commercial balloon operations in the Willamette Valley that will charge $200-300 a person for an hour-long excursion among the clouds. These include Vista Balloon Adventures in Portland (vistaballoon.com), and Portland Rose Hot Air Balloons in Aurora (portlandroseballoons.com).

Also, if you haven’t already, be sure to check out the Northwest Art and Air Festival in Albany, August 24-26. For more information visit www.nwartandair.org. Highly recommended!