2017 From A Mayor’s Perspective 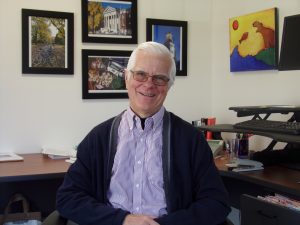 It’s a brand new year, and many of us are reflecting on the past while looking toward the future, including our representatives in city government. Sitting down with Mayor Biff Traber, I gathered a more coherent view of what’s been accomplished over the past year, and Imagine Corvallis 2040 undoubtedly topped the list.

In 2016, the project engaged the community to develop a vision for the future; the result was huge in scope. The plan tackles just about every issue a city like ours faces: education, tourism, agriculture, job creation, affordable housing – if it’s concerning, it’s covered.

“We had started that work in 2015 and 2016, and this year we worked on more precise definition and formed what we call ‘ICAN,’ the Imagine Corvallis Action Network,” explained Mayor Traber.

ICAN is an advisory board consisting of city, county, school district, and Oregon State University officials, along with local business representatives and community activists tasked with implementing the tenets of the Imagine-Corvallis-2040 vision.

“They will work the details of how to develop this plan,” said Traber, “they’ll begin to put together the projects from various community groups as well as city projects, to further us toward more education, sustainability, diversity; these goals we’ve put together in our vision.”

Now that our city’s vision and its implemental hands are in place, we can expect to see this vision continue to take shape in 2018. Learn more about Imagine Corvallis 2040 at the link below.

“It took a while to work our way through how we’re going to deal with this,” admits Traber, “and it became clear that we needed a separate advisory board.”

The Climate Action Advisory Board will be coordinating with ICAN to ensure our climate goals will be met, and be integrated into other aspects of the city’s long-term plan.

We are a relatively small city, and some might wonder how much of an impact our dedication to reducing climate change can actually have. It would be one thing to make these changes and just keep our mouths shut about it, but 2017 gave Traber and the city an opportunity to lead by example on the national stage.

When President Trump and his cronies pulled us from the Paris Climate Accord, Traber joined 387 other U.S. mayors in a statement vowing to uphold the goals put forth in the agreement, with or without the help of the federal government. This statement sent a message to the rest of the country – and the world – that the U.S. is still committed to combating climate change. Our carbon footprint might not be at the level of a big city, but we have a loud voice, and we used it in 2017.

This is an oversimplification, but if 2016 was a year to establish our vision as a city, in 2017 we put our mechanism of progress in place. According to Traber, the wheels are turning. What we really want, however, is the payoff. We may be leading the charge with combating climate change, but with issues like affordable housing, we still have a long way to go.

The new year could be great for the city of Corvallis, and every single one of us can help make that happen. Some of us don’t have the time to volunteer for the city or a nonprofit, but our voices alone can impact the way the city operates. City officials are the most accessible representatives we have, and they rely on us to give them our perspective. The city website has contact information for all of our representatives, but feel free to politely scream your suggestions in their direction at Freddy’s. They love that.

Since we were around, we also asked our Mayor if he’ll be seeking reelection in 2018.

“I haven’t decided!” he laughed. “I had set myself a soft goal of the end of the year, I’m weighing things in my personal life, and what will happen in the career paths of my wife and I.”

Well, Mayor, feel free to let us break the story when you decide. After all, look at this nice stuff we just wrote about you, nudge nudge.