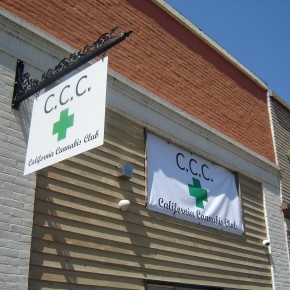 On 2nd Street in Corvallis this week, family members hung two small signs outside a storefront in anticipation of opening their new shop within the month. Owner Tony Rizzo uprooted his family from their L.A.-area home to help launch the California Cannabis Club—Corvallis’ newest medical marijuana dispensary. Rizzo, who has relatives attending OSU, said he’s motivated by a desire to “share Californian cannabis culture” and by the prospect of selling marijuana to the general public this July.

The owner of the 220 NW 2nd Street location confirmed that after Nature’s Better Health Center closed down its dispensary business, Rizzo’s bid was favored over a competing bid from a Washington state operation. Before you rush out the door to welcome our new neighbors from the south, be aware that Rizzo’s dispensary venture has yet to acquire a medical marijuana distributor license from the Oregon Health Authority. Rizzo couldn’t confirm an opening date, but said he hoped to open before the end of May.

Nature’s Better Health, still in possession of one of only four active medical marijuana dispensary licenses for Benton County, reports on its Facebook page that their “building in Tangent is coming along nicely.”