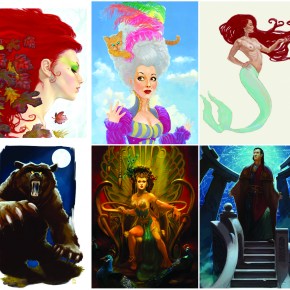 At this month’s third Thursday Arts Walk, The Advocate’s art gallery will host work by several of Corvallis’ most intriguing artists, including that of veteran illustrator Patricia Smith.

Smith, whose work fixates on themes of fantasy and science fiction, started in traditional media but soon progressed to digital painting after attending the San Francisco Academy of Art University in 2004.

Smith supplements her art career by working as an illustrator for publishers of trading cards and role-playing games both on- and off-line. She also creates illustrations and branding for several Corvallis companies. Her work can be seen at downtown sites like the Block 15 Brewery, Cloud & Kelly’s Public House, and the Majestic Theatre.

Smith periodically enters illustration contests in order to develop her work. “It’s a good way to continually push myself and get my work out there,” she explained. Over the past year, she’s concentrated on expanding her client base, developing intellectual property, and trying new mediums such as watercolor. “I’ve been doing more work in the horror genre as well as doing more creature designs, which I’ve been loving,” she said.

Smith finds encouragement in collaboration with other artists. She’s part of an Internet-based illustration group called Women in Fantastical Illustrations (WiFi), and says that the women she works with “are talented, hardworking, and every single one a source of inspiration.”

Artists who wish to join forces with Smith on a local level should attend the Drink and Draw Social Club, hosted by Smith at Cloud & Kelly’s on the first Tuesday of every month.

Smith’s focus on action-fueled figuration stems from a lifelong love affair with comic books, which she first discovered during childhood. She’s found much of her inspiration in the work of illustrators like the late fantasy and sci-fi artist Frank Frazetta, who specialized in comic books and posters.

At this month’s show, expect to see a variety of bold, colorful, and imaginative work with plenty of beautifully rendered portraiture. Smith is adept in digital painting to a degree that even most traditional painters would envy.

What motivates Smith to continue her pursuit of prolific visionary art? “Just to continually grow as an artist,” she said. “That’s darn good motivation right there.” Expect this young woman to soon become a classic.