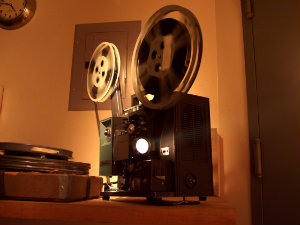 Basically it gives anyone trying to do a screening (more innovative than inviting their pals over to watch Netflix) access to a crop of highly independent shorts and features. It allows exhibitors to connect directly to filmmakers and negotiate their own screenings.

In other words, it’s the future of movie theaters. You didn’t think you’d still be going to the Carmike in the new post-apocalyptic Mad-Maxian future we’re careening towards, did you?

“How can we more fully explore the possibilities of hyper-local events designed to create an effective context for contemporary cinema?” Rao asks, via press release. “How can we push the film-festival concept into smaller, more intimate nooks and crannies in our societal fabric? What new terms are needed to describe the formats of communal movie watching that resonate with us today? These are the questions we’re hoping our grant-winners will help to answer.”

Simple Machine will be giving out $1,000 each to four festival planners per year. The first winner will be announced Tuesday, April 15.

There are almost no rules, encouraging festival organizers to think outside the box. Basically, it can’t be a pre-existing festival (go looking for your handouts elsewhere, Sundance…), it can’t be online (sorry hermits, but you’re going to have to host real people), and it has to cost under a grand (the full cost of the festival is to be covered by the grant, so no supplementing the budget, Mark Cuban).

Here’s a freebie: a floating film festival. Alliteration aside, can you think of a better way to see some movies than relaxing on the Willamette in an inner tube? Why no, I’ve never heard of liability exposure…

To submit a proposal for a film festival, email your pitch to grant@smplmchn.com.