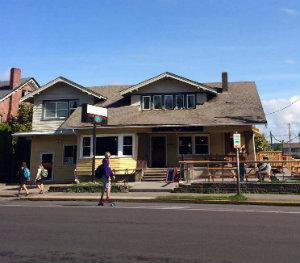 The big yellow house on Monroe and NW 23rd is once again open for business. The Red Fox Café is serving beer and food in the old home of the Brew Station across from OSU. The Station’s front porch was a popular fixture among students for years, but its owners were forced to close their doors last summer because of a substantial rent increase.

Savvy restaurateur Cloud Davidson has no intention of suffering a similar fate. From a brand new state-of-the-art kitchen to an expanded deck, the Red Fox Café is looking to stay awhile.

The interior has the feel of an English pub, with dark wood and cozy seating. An intimate bar occupies one of the two rooms in the nearly 100-year-old Craftsman-style home. The real draw continues to be the front porch on the still-yellow house; the Fox has enjoyed robust crowds filling the outside seating since they opened on April 1.

The prime location might be bringing in business, but Cloud plans to keep his new patrons coming back. Locally sourced ingredients and meals made from scratch are served for breakfast, lunch, and dinner. That’s in addition to the 10 beers on tap and a full bar.

This is Cloud’s third restaurant in Corvallis. Both Cloud & Kelly’s Public House and the Downward Dog have become downtown fixtures in their own right. Assuming the Red Fox continues to be a success, we wanted to know what plans Davidson has for the future.

“It’s like asking a woman who just gave birth if she wants another kid,” Cloud answered with a chuckle. “But I’ll think of something. It’s like a fire inside.”