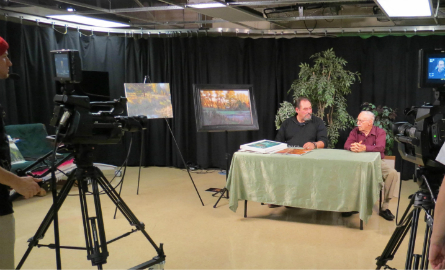 Although Comcast is a giant for-profit corporation, riddled with advertisements and reruns, they are federally mandated to provide a non-profit public access channel. Corvallis CCATV channel 29 is the city of Corvallis’ Public Access Channel, which airs content created by members of the community.

Public Access T.V. is part of PEG channels (PEG stands for Public, Education and Government channels). PEG was created in the 1980s in order to give the common person access to television so that corporations wouldn’t have sole access to the airwaves. The idea was to enable citizens to be able to provide programming and participate in democracy with a new way of communicating via media. The Public Access Channel is about as by the people, for the people as it gets. Members of the community don’t necessarily need an in-depth knowledge of how to use all the equipment, but the ability to learn as much as they can is there, for free.

Because of previous contractual agreements through the city of Corvallis and Comcast, Comcast provides funding, through a PEG fee, for equipment. Everything from field cameras to HD cameras, microphones, lighting kits, editing equipment, MacBook Pro, DSLR cameras, GoPros, a voice-over room, and a remote three camera package, all of which can be checked out for free, once members have gone through the training to use them.

The Public Access Network and Channel 29 enables community members to produce and air their own content. “It could be your kid’s bar mitzvah. It could be your kid’s soccer game, it could be something you produced yourself, a talk show, art show, anybody can put anything up,” states Amy Hunter, who manages, produces and schedules programming for Channel 29. Topics can be about anything, as long as the material isn’t copyrighted and adheres to FCC guidelines. Occasionally volunteers will go into the field and cover events such as a Corvallis Knights game, Da Vinci Days, or other local events.

Hunter co-teaches training classes with John Friedlander, an independent video producer. The 18 hour class typically costs $100 and is held over two days. Student teams of two produce a Public Service Announcement for a nonprofit group. It is a documentary style field production class, where members take the equipment into the field. The first day includes production, camera lights and sound. The second day focused mainly on editing, where members load footage into Final Cut Pro. Once the project is complete, it will be aired on Channel 29, and the members who created it will be given a DVD of their “show.” The second class is studio production, where members participate in a three hour class to learn how to produce shows in the studio.

Class size usually averages about ten people, but Hunter states they’d love to have more members of the community come in to take advantage of the very professional grade equipment that is available to them.

Hunter doesn’t edit or prescreen any of the content before it airs. Should people need editing help, Hunter is available, but unless her assistance is requested, the user exercises sole responsibility over their content.

Public Access runs daily from 9 a.m. to 11 or 12 p.m.. Shows usually get four airings; a primetime night slot, an afternoon, a morning and a weekend. Some people provide weekly content. Depending on the amount of content coming in, shows will either be bumped quicker or continue to air. However, all shows get at least a month of airtime. Current program content ranges from a Christian talk show and other religious programming to local politics and current events, as well as master gardeners, Ishvara, health and a health care forum.

One long-standing show, “Focus on Art,” is produced by Paul Rickey. Rickey interviews a local artist once a month, and the artist brings in work to discuss. Rickey has interviewed artists who’ve done fine arts, ceramics, glass blowing, macramé and, or fiber arts, and two local gallery owners, among others.

“What I like about this program is I interview local people. I’ve gone as far as Independence, but mostly they’re from Corvallis or Albany, and they’ve always been interesting and fascinating artists,” says Rickey. His goal has always been to support local arts. “It gives local artists opportunity to show their work and also to help artists get their work out” says Hunter.

With the professional grade equipment and plenty of space, I was surprised to find out that more people aren’t clamoring to use the studio. Continued available funding for Hunter’s position is uncertain, and if it goes, so too could the studio. If funding for Hunter’s position does run out, the studio could be run on a volunteer basis. However, there is no guarantee that it will remain. CCATV 29 needs to generate enough public interest in utilizing the studio and space to survive after the contractual agreements and funding run dry. “It would be nice to get more outreach, to get the word out and so people’s shows could get the viewership” said Hunter. “What we really need around here is a good marketing person, someone who’s really into doing outreach and getting the word out.”