A Twisted Sense for Folk 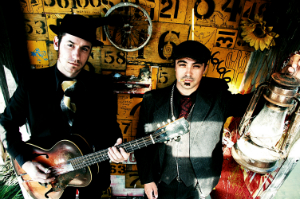 Los Angeles-based folk magicians The Peculiar Pretzelman will make a stop in Albany next Friday on their West Coast tour. The Pretzelmen play a creepy kind of show-tunes spin on bluegrass. Perverse gospel covers join a repertoire of pre-WWII blues and jazz standards.

The instrumentation is even weirder. It genuinely sounds like these self-described “sneaky bastards in pinstripe suits” are doing percussion with your good silverware. A six-string banjo and a few custom instruments round out the incredibly raucous and eccentric sound.

K. Incroyable and The Deacon, who are colloquially known as The Pretzelmen, dress, act, and talk burlesque. Listening in, you get the feeling that you’ve heard this somewhere before. You sense that you know this style, but can’t quite recall what decade it imitates.

Kevin Incroyable
Advocate: There are a lot of pseudonyms flying around here. Can you straighten us out as to who’s doing what on this tour?

KI: The last couple years, it’s been me and the Deacon out on these tours. He plays all kinds of crazy percussion, and I play a variety of stringed instruments. A couple are built by me, some are built by others around the country.

We try to make as much of a wall of noise as two human beings can possibly make.

Advocate: You dip pretty deep into a tangle of genres and decades for inspiration and material. What genre would you classify your music as right now?

Pretty much everything boils down to rock and roll, no matter what the influences are. We’re doing a very specific kind of noise folk. We bring in all these influences from all over the world, and see if we can sort of incorporate it into the kind of stories that I want to tell. We want to figure out how to dissect it, make it part of our lexicon. More and more layers, more colors, more texture.

Advocate: You are recording original material as well. Who writes the lyrics? Are these group compositions?

Advocate: Can you talk about your philosophy of instrumentation?

KI: We take so much influence for folk music. The only kind of music that I’m really interested in is folk music. Folk music is really an abused and misunderstood term. In reality, folk music is whatever music is being made by people—creating stories about their experiences or passing stories down.

As far as I’m concerned, if you’re not making folk music, you’re making genre music. That holds no allure for me.

You can, on virtually any electronic device, have access to many different types of music from around the world. Makes you feel like there’s new colors in the rainbow.

We want to create our own universe that we can live in and play in. You let the sound of the instruments guide you a little bit. Letting it slowly, naturally, come together, like a rock formation. Let it organically produce itself.

Advocate: Your show at Calapooia Brewing will be on Halloween. Are you planning to do any music from Electromagnetic Terror?

KI: Yeah, definitely. The last time we played Calapooia was also on Halloween, and that was when we released Electromagnetic Terror.

Advocate: What does Halloween mean to you?

KI: Halloween is my favorite holiday.

Everything about my life, everything about being a professional performer—telling stories, trying to shake people loose of the everyday stricture of what they’ve built their lives into—that’s what Halloween is about. It’s about a celebration of the weird something in life, about getting to be something that’s beyond yourself, beside yourself.

You think more about letting that weird stuff linger with you more and more. Eventually, you make a career out of making people feel that way.

The Peculiar Pretzelmen will play at Calapooia Brewing in downtown Albany on Friday, Oct. 31 at 9 p.m. Salt Lake City indie band Crook and the Bluff will open the show.