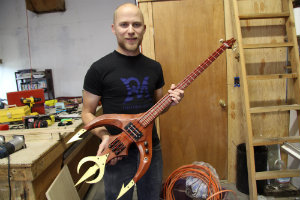 Paul Kincaid made his first guitar in eighth grade. His inspiration? “My brother got an electric guitar.”

Paul is 31 now, and the Oregon native’s company, Requiem Strings, will celebrate its fifteenth anniversary next year. He is an artisan making guitars, basses, and ukes in the Corvallis area.

If you can try to imagine what it’s like making a living off being an independent entity, trying to compete with the behemoths like Fender and Gibson, the countless smaller names and seemingly endless unbranded knockoffs thereof, it’s probably even harder than you’re thinking.

“If I was doing this for money, I would have quit a long time ago,” says Kincaid.

He also works in guitar repair at Gracewinds, plays with bands, does sound at all manner of events, including for the Majestic, and teaches guitar-building classes at the OSU Craft Center.

He even aided in the design of the new building that is currently being constructed that will house the wood shop he teaches in.

He also likes to teach in his own shop, where he has an OSU physics professor as an apprentice.

He’s even discussed work on a research project that would utilize his practical knowledge of the acoustics and adhesives in adhesives research.

It’s fortunate he has been able to parlay his abilities into other forms of work.

A guitar builder like Kincaid will have to pay more in raw parts than you would pay for a solid, well-built Fender. Then when you add in the time he’ll spent crafting the instrument from scratch, it’s hard to make it financially feasible. The overhead is just insane.

Amongst other musicians, a Requiem bass built by Kincaid is played by Erick Lewis, the Portland musician who has played with the likes of Stevie Wonder and Jay Z.

But what if you’re looking for something more than a little different?

In his workshop on a Friday morning, he plays music in the background while he tools around the shop. He digs around and presents his three-string trident bass.

It’s got a brass trident spike sticking out the bottom, a sleek, beautiful finish, human bones in the inlay and tuners—wait, what?

That’s when you call Paul.