A ‘Mountain’ Of Fire-Fighting Bills 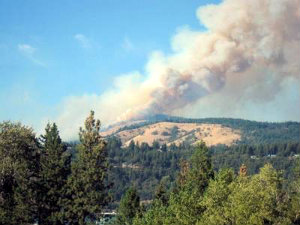 The Oregon Department of Forestry is asking lawmakers to approve an additional $40 million to cover the costs of this year’s record-breaking fire season.

The request was made at a hearing in Salem Thursday before the Joint Interim Subcommittee on Natural Resources.

State Forester Doug Decker told lawmakers that this summer was the department’s most challenging fire season in 60 years.

Fires scorched more than 100,000 acres of land under department protection. And Decker says the cost of fighting the largest of those fires came to a record $122 million.

“We spent the last couple of months tabulating the cost of paying what is really a mountain of fire-fighting bills. And the costs have a pretty clear dimension and it is a mountain,” Decker told the committee.

After federal reimbursements, the state’s share is expected to be about $75 million. That’s about 10 times the state’s average cost over the last 5 years.

As far as that request for an additional $40 million dollars, ODF isn’t likely to get an answer on that until February. That’s when the full legislature meets again in Salem.