Culture Fail: Caught in the Middle… Debunking the ‘Monsanto Rider’ 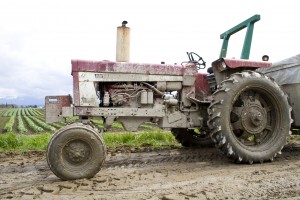 From the state that brought you Todd “legitimate rape” Akin (R-Mo), comes a new breed of awful in the form of Senator Roy Blunt (R-Mo), sponsor of Section 735—the Farmer Assurance Provision, also known as the “Monsanto Rider”—of interim budget bill HR 933. Passed on March 20th of this year, the budget bill essentially enables the US federal government to continue to operate, which we can all agree is certainly better than not operating. But Section 735 forces the USDA to green light the cultivation of (previously de-regulated) genetically modified crops that a court has subsequently halted prior to the completion of an Environmental Impact Statement. Senator Blunt apparently worked with Monsanto to craft the rider.

“What it says is if you plant a crop that is legal to plant when you plant it, you get to harvest it,” Senator Blunt told Politico.

Oh wait, that doesn’t sound so bad… losing an entire crop due to the sudden illegality of the seeds you’ve sown could spell financial ruin for some farmers, and may cost taxpayers a pretty penny in subsidies otherwise. Don’t get me wrong, Senator Blunt is anything but a wholesome, farmer-friendly dude—in fact, he’s the largest Republican recipient of funds from Monsanto to date. But I can’t find any major flaws in the logic of this provision—at least not enough flaws to warrant its nullification. (For those currently gasping in disbelief, don’t be concerned: Senators Jon Tester (D-Mon.), Barbara Boxer (D-CA), Kirsten Gillibrand (D-NY) and Patrick Leahy (D-VT) have introduced Amendment #74, which will in fact nullify the rider. Plus, like the rest of the legislation in HR 933, it expires in 6 months.)

One legitimate argument stands out against Section 735: What if it’s determined later that a particular crop was harmful to the environment or to other organisms?  Farmers throughout the US are already dealing with herbicide-resistant weeds and pesticide-resistant insects. While there have been no major documented incidences of ecological destruction (well, beyond the act of farming itself) due to GM crops, the argument still stands: by the time the seed is planted, it’s too late to take it all back. So we ought to be damn sure that what we’re planting is safe before we plant it.

But consider the following: In 2010, when over 90% of the nation’s sugar beets were GM, courts determined that the USDA’s initial environmental assessments of the crops were inadequate, and further testing was required. The USDA issued four permits for the limited cultivation of GM sugar beets, but a judge later ordered that these seedlings be pulled from the ground. While this decision was eventually overturned, it highlights the fact that farmers do need protection from the whims of the legal system.

In truth, those who oppose Section 735 tend to oppose the planting of GM crops (and often the use of non-organic farming methods) in general. And for good reason—it’s absolutely the case that Monsanto and the rest of the Big 6 take advantage of farmers and are happy to take whatever risks with the environment they can get away with, safety be damned.

But it’s worth reading over the rider in detail. You may be surprised to find that while it does protect farmers, it offers nothing special to corporations. It seems that the true failure is not in Section 735, but in the apparent inadequacy of the USDA’s GM crop de-regulation process.

Check out the full version of Section 735 here: http://www.govtrack.us/congress/bills/113/hr933/text.