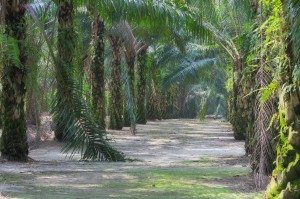 Palm oil—it sounds pretty innocuous, right? According to the Rainforest Action Network (RAN), more than half of the items sold in the grocery store contain palm oil. That includes everything from chocolate to cosmetics and cupcakes, margarine and cereal and soap. It’s the cheapest cooking oil in the world. Many times, it’s hidden within the generic term “vegetable oil.” Many natural and organic foods contain palm oil—it’s vegan-friendly, too.

However, global demand for palm oil has led to a huge increase in oil palm plantations. And more than half of the palm oil in the world comes from the islands of Borneo and Sumatra, according to the World Wildlife Fund. The former has 11,000 square miles of plantations; the latter 14,000. Land that used to be rainforests, to be exact. To make space for oil palm plantations, workers burn and clear-cut acres upon acres of rainforest. The forest’s natives—most notably the endangered orangutan (one of the rarest and smartest great apes)—are killed or flee. Many mammals, birds, and reptiles (an estimated 90 percent) cannot survive in these huge monoculture plantations. Because it’s happening on such a huge scale, many may soon become extinct. That includes the Sumatran tiger, of which less than 400 remain, according to the WWF. And the Sumatran rhino, of which even fewer exist.

Word is spreading, but the destruction continues. Campaigns range from environmental groups to Girl Scouts protesting the use of palm oil in their cookies. Unfortunately, many of the largest palm oil plantations are already operating illegally. Poaching, logging, and the pet trade present further threats. But without consumer demand for products with palm oil, these plantations would not be profitable.

Some companies are working to enact change, such as Kellogg’s and PepsiCo. The latter is working to replace palm oil with sunflower oil in its products. Unilever uses four percent of the global supply; it also created the Roundtable on Sustainable Palm Oil (RSPO) in 2004, a group that has created a certification for sustainable palm oil. The Girl Scouts now source palm oil for their cookies from the RSPO. But most companies don’t: certified palm oil costs more, and companies use it because it’s cheap. Worse, many members of the RSPO have subsidiaries who don’t abide by its rules. There’s no easy solution, and, overall, demand for the product is rising.

Remember when you first learned that slash-and-burn farming was destroying huge swaths of tropical rainforest daily? Perhaps it was a decade ago, perhaps longer. Well, it hasn’t slowed or stopped. It’s hard to envision, but it’s estimated that more than 80,000 acres are cleared daily, releasing huge amounts of greenhouses gases into the atmosphere. The UN estimates that tropical rainforest deforestation rates were 8.5 percent higher last decade than during the 1990s. More than 150 plant, animal, and insect species are lost each day forever. The UN estimates that 98 percent of Indonesia’s forests may be lost by 2022—a statistic that certainly doesn’t bode well for its inhabitants.