Willamette Valley’s The Mushroomery: Fungus Among Us

Whether you’re in Portland or Eugene or somewhere in between, you’ve probably noticed the stunning displays of fresh and dried organic mushrooms in the produce section of your local grocery store and farmers’ markets.  Maybe you’ve already sampled some of the tasty fresh oyster mushrooms or enlivened your dinner table with chanterelle powder bought at Corvallis’ First Alternative Co-op.  That appetizing collection of edible fungi is grown and harvested locally by Jennifer and Dustin Olsen, owners and operators of The Mushroomery, located on 14 bucolic acres just outside Lebanon, Oregon.  Nestled in the foothills of the Cascades, The Mushroomery’s edible and medicinal products, from well-known morels and shiitakes to more unusual bleeding milk caps, are so popular that the Olsens are barely able to meet demand.

Fortunately for the mushroom lovers among us – and there are a lot – The Mushroomery is still growing.  While the Olsens don’t plan to expand much beyond their current distribution areas, they do hope to cultivate a wider variety of mushrooms, including Oregon truffles, at their farm in the near future.  The couple also makes a variety of tasty and useful mushroom-based products, including gravies, spices, teas, and tinctures.  Interested in growing your own mushrooms?  The Mushroomery supplies mushroom plugs and mushroom-growing kits that can fruit for years, rather than only for a single season as is more common among kit suppliers. 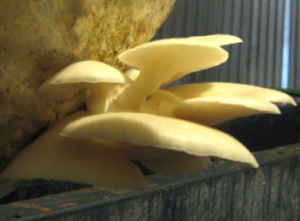 The Olsens are truly passionate about their fungi, and they’re just as knowledgeable.  Visit The Mushroomery and you can see why their farm, only four years old, is so successful. The mushroom cultivation methods and facilities, which the Olsens built themselves, are top notch and stem from years of Jennifer and Dustin’s combined experience.  Jennifer became interested in mushrooms at the early age of 17 while commercially harvesting chanterelles near Mt. Rainier in Washington.

“I just fell in love with mushrooms,” she said. “It was my first time in the woods – I came from Miami, so I was pretty new to the forest, but I remember the next day I went out and bought every book I could find on mushrooms.” 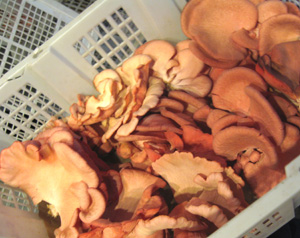 After Jennifer moved to Seattle and joined the Puget Sound Mycological Society, she began studying mycology at Washington University.  Later, Dustin was introduced to Jennifer while she was working at a mushroom farm in Bellingham, where they discovered their mutual appreciation of fungi.  When The Mushroomery concept was born, relocating to Lebanon was a simple decision – Western Oregon offered beautiful healthy farm land, a high demand for mushroom products, and a prime location for wild mushroom growth.

Along with cultivating fungi at their farm with the help of a small number of interns, the Olsens also spend part of their time wild crafting the mushrooms they sell, which means collecting from local sites known to produce good yields of a particular type of mushroom.  Many mushrooms, including the ever-popular and tasty chanterelle, cannot be successfully grown in a farm setting, and must instead be harvested from the wild.  The couple is uniquely talented at finding reliably mushroom-laden sites, and it’s definitely a challenge – on a recent morel-hunting expedition I managed to find only four of these delicious and highly-prized fungi.  The Olsens are also keenly aware of the potential impact of wild crafting on local ecosystems.  They make sure to leave mushroom harvesting sites pristine and avoid over-harvesting.  They also work hard to maintain a sustainable, energy-efficient farm.  The couple built their laboratory and cultivation centers using repurposed building materials, and they purchase their mushroom growth media (straw and sawdust) from local farmers.

Western Oregonians should count themselves lucky – The Mushroomery is one of Oregon’s only mushroom farms that distributes its crops and mushroom products to our local grocery stores.  Many of these local mushrooms aren’t just delicious – they also provide high doses of fiber and important vitamins and minerals, including selenium, which can protect against prostate cancer.  Next time you go shopping, look for The Mushroomery’s display in the produce aisle – and invite a fungus home for dinner.