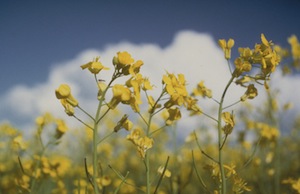 The Willamette Valley is one of the five best places in the world to grow specialty seeds, including organic veggies and salad greens. Valued at $34 million last year and increasing in worth, this industry is now in danger of collapse according to local growers.

The culprit is canola. A member of the Brassica family alongside kale, rutabagas, and mustard greens, canola cross-pollinates with many of the crops grown by specialty seed growers. Up until last week, it was banned from the Willamette Valley for this reason. On Aug. 10, the Oregon Department of Agriculture (ODA) reversed this decision, permitting canola as of Sept. 1 in an area previously deemed protected from the crop.

According to Frank Morton of Wild Garden Seed, a member of the Willamette Valley Specialty Seed Association who grows organic seeds at Gathering Together Farm in Philomath, this decision could ruin Oregon’s specialty seed industry by destroying the genetic integrity of its crops and introducing new pests and diseases into the valley.

“We have a lot riding on this decision by ODA,” said Morton, who added that the decision goes against recommendations by experts at OSU. “Scientists determined that if the ODA allowed canola growing within the valley the specialty seed industry would end up being contaminated by it. They advised great caution.”

Morton said that seed-growers from all over the world come to the Willamette Valley to grow specialty seeds–many from countries where the industry has declined after the introduction of canola: Denmark, France, Germany, Korea, and Australia.

“They used to have seed-growing regions with strong profitability; it’s all been lost to canola,” said Morton. “The ODA thinks that they can do something that no one else in the world has been able to do, which is to allow canola into a specialty seed region without causing that region to deteriorate.”

Katy Coba, the director of the Oregon Department of Agriculture, admitted that large-scale canola production makes the department nervous–but added that the crop shouldn’t become a major commodity in the valley. About 480,000 acres of the Willamette Valley will become open to canola production, while two million acres will remain protected.

“We know that not all the growers that own that property are going to be growing canola,” said Coba, who noted that canola can only be grown twice in five years on the same piece of land. “We’re making sure it’s limited.” 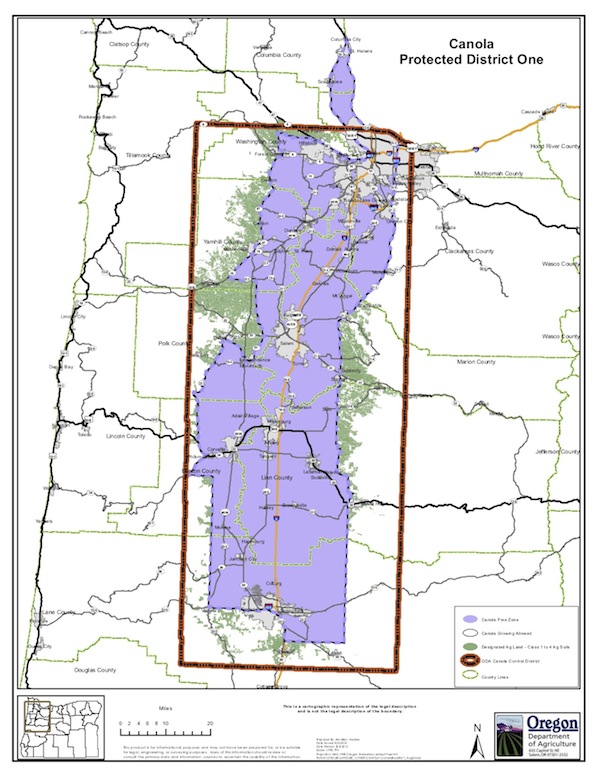 The ODA places no restriction on genetically modified canola, which constitutes the vast majority of canola in the United States.

“We are particularly alarmed by the fact that when canola comes to the Willamette Valley, it will be GMO canola,” said Morton. “Any canola that’s grown here is going to introduce a GMO contamination threat to growers like me.”

Morton said the decision to introduce the crop represents a turn-around on the part of ODA.

“In 2009, Coba announced they were going to enhance this protected zone. The purpose of doing it was to protect the specialty seed industry. Three years later, the same person is saying the protected district is no longer necessary.”

The ODA is using a temporary rule process, which negates the need for public input.

“There are no public hearings related to this until Sept. 28–four weeks after they will have already planted the seed,” he said. “This makes a mockery of the public process.”

According to Coba, the decision to introduce canola is driven by a focus on renewable fuel development–namely ethanol and biodiesel made from canola–and she said the issue started developing as long as eight years back if not more.

“There seems to be nowhere to get the consensus on this issue and there are a lot of unhappy people out there,” she commented.

Coba maintained that a system in which growers communicate about which parts of the valley are used to grow certain crops–already used to prevent cross-contamination of specialty seed crops–will work to protect growers. Morton noted that the system is entirely dependent upon the goodwill of the growers–plus there just isn’t enough room for canola.

“We know our system very well and we know that we cannot fit canola into our map system because there’s not enough room,” he said.

The damage runs only one way. The fact that different specialty seed crops would be damaged by planting too closely has prevented cross-contamination in the valley so far, but this contamination doesn’t matter when the seeds are used to make oil.

Coba remained confident that the growers could avoid the problem.

Biodiesel is not currently a profitable industry in the Willamette Valley. According to Morton, in 2005 the state proposed a five-cent-per-pound subsidy to farmers who grow canola and a fifty-cent-per-gallon subsidy for the biofuels industry to produce canola.

“This is in stark contrast to the specialty seed industry, which is extremely profitable without any subsidies at all and which has a world-class reputation,” he said.

Morton also noted that a short-lived attempt to grow canola in Oregon about 30 years ago failed economically–and those fields today are still contaminated by the aggressive weed.

“This is a one-way street; once you plant canola it is virtually impossible to control it,” he said.

The seed-growers are not going down without a fight. Earlier this week, a coalition of specialty seed companies, the Center for Food Safety, the Friends of Family Farmers, and other groups began a legal battle against the ODA to protest the introduction of canola.

“There are millions of acres in Oregon available to grow canola where it’s not restricted in any way. Why would you allow a tiny bit of canola to be grown in a tiny part of the state and displace a world-class industry?” said Morton.