Human beings have enough difficulty controlling their famously erratic emotions without the added temptation of anonymity.  But with the increasing popularity of online blogging – the public posting of articles, images and videos supporting an opinion, art form, style of living, etc. – internet users have gained the ability to comment on one another’s opinions anonymously, i.e. without fear of repercussions.  The number of free online blogging platforms is steadily increasing, with Tumblr, Blogspot, Blog.com, YouTube, and WordPress to name only a few.  While the thoughtful sharing of ideas and debating of personal beliefs should absolutely be celebrated, an increasing number of people are taking this new ability to a complicated and dangerous level – internet stalking.

While most online bloggers have only a minor following (many simply use blogging as they would a diary), a collection of internet celebrities has blossomed within the blog culture, whose posts are read by hundreds to many thousands of fans.  Such bloggers’ opinions and statements impact a large number of readers, nowadays often impressionable adolescents and teens.  The blogging world is a sea of hugely varied opinions, many of which are intelligent and thoughtful, and some of which are wildly offensive to many.  But popular internet bloggers are pressured to remain unblemished and politically correct – which brings to mind our unrealistic expectations for most celebrities.  Their statements are sometimes taken extremely personally by readers – in some cases causing massive bursts of outrage among critics, who fail to remember that bloggers are human beings with a right to their own personal opinions, just like the critics themselves.

While criticism of another’s opinion is not in itself a problem, many of these internet celebrities, women in particular, have been subjected to anonymous messages of hate, violence, and sometimes threats of death in response to their posts and videos.

Laci Green, whose highly popular and controversial tumblr blog and video series, Sex +, “covers topics related to sexuality, relationships, body image, gender, oppression, and identity,” recently received threats of violent beatings and death along with her home address and photos of her apartment building.  This occurred in response to some of her posts and videos, in which she expressed highly negative opinions of organized religion as a whole, highlighting Islam and Mormonism in particular (her mother is Mormon and her father was Muslim before converting to Mormonism).  Laci’s anti-religious opinions, along with her use of a transgender slur in a video blog made when she was 18 years old (for which she profusely apologized), sparked angry responses from critics.  Green strongly believes that individuals from a “social justice” blogging community sent the most violent of the messages she received.  Fearing for her safety, Green has contacted police and is no longer using her tumblr and video blogs for the time being – she has essentially been driven from her blogs by potentially violent, anonymous internet stalkers.

Another popular author and video blogger, John Green, posted in his own tumblr blog,

“You want to know why there are so few women in the Top 100 most viewed lists on YouTube? Because women are far more likely to be stalked, threatened, and attacked on the Internet, and they are far more likely to see those attacks move from cyber-bullying to real life threats, which too often forces them to abandon their work and their audiences. 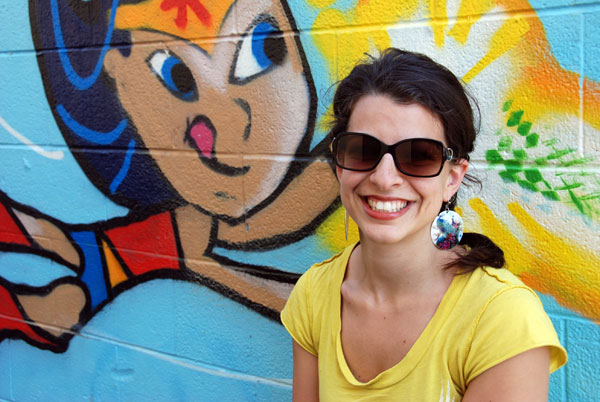 Anita Sarkeesian, a feminist video blogger and author of the website and blog, Feminist Frequency, experienced intense backlash from a recently proposed video project entitled, “Tropes vs. Women in Video Games.” Her project aims to analyze the roles of women in the gaming industry, with a major focus on the portrayal of females in video games themselves.  Not only did she receive angry messages threatening physical violence, rape, and death, a shocking number of anonymous individuals created lewd images and manipulated photos of Sarkeesian to attack both her gender and presumed sexuality.  Her website was attacked and hackers attempted to shut it down.  On July 5th a game called “Beat Up Anita Sarkeesian” was uploaded to the website NewGrounds, in which each mouse click progressively bloodied an image of Sarkeesian’s face until the screen turned red.  Perhaps not surprisingly, none of these attacks addressed her actual project or opinions.

In reference to image manipulation including cartoons, Sarkeesian states, “There is a difference between using ridicule to challenge power and using it as a weapon to police the status quo by reinforcing sexism, racism or homophobia.”

Unfortunately, it’s clear from recent and on-going internet stalking cases that most blogging platforms are ill-equipped to deal with abuse.

“It should be noted that none of the social media services I use have adequate structures built-in to effectively deal with cyber mob style harassment.  Internet services need to do a much better job of providing the tools and functionality that empower those being harassed and abused via their systems,” Sarkeesian stated in a recent post.

Internet law is still extremely young and confused, and the mask of anonymity now available to internet users will take some getting used to.  Cases of online stalking and abuse show how far removed the internet culture has become from the big picture – no one can appeal to everyone, and we can’t simply attack anyone who speaks their mind.  We need to remember that anonymity does not give us permission to stoop to purposefully offensive, let alone downright threatening, behavior.  We accomplish nothing good by allowing blind hatred and rage to steal the focus away from potentially enlightening public debates.

Are you experiencing online abuse?

It’s certainly not only the most popular bloggers who are subject to potentially dangerous online stalking and abuse – all bloggers (from Green and Sarkeesian to your 16-year-old son) are susceptible, especially if their opinions are extreme or unpopular or if they differ in any way from a social “norm.” Followers of comedian Daniel Tosh will note the incredibly angry and violent threats received by Alisse Desrosiers, a writer for feminspire.com, who declared in an online article that Tosh’s jokes about rape were anything but funny.

This absolutely does not mean that bloggers should stop expressing their opinions – the world can only benefit from group discussion of important topics – but they do need to proceed with care.  Given the angry and sometimes violent conduct of individuals who harass online bloggers, internet personalities are advised to take safety precautions to protect their personal privacy.  It’s never a good idea to share your personal contact information or even your general location, and it may be advisable to avoid details that pinpoint your home.  While freedom of speech is highly protected – someone who calls you a bad name or even tells lies about you on Facebook is not a criminal, I’m afraid – if you feel legitimately concerned for your safety, call your local police department for help.  In criminal situations, the Corvallis Police Department can take steps to protect a victim of harassment and identify a potential stalker or abuser.  While most bloggers and other online social application users will not experience dangerous stalking, there’s no reason to risk your safety by divulging your personal information to the online public.