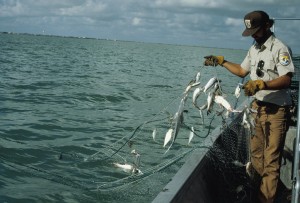 This past November, Oregonians voted on Measure 81, which would have banned the use of gillnets to harvest salmon by non-tribal commercial fishermen in the Columbia River. The measure was rather volatile, pitting commercial fishermen against their recreational brethren.

But before going to a vote on November 6, Governor Kitzhaber announced that an alternative to Measure 81 would be devised, disallowing gillnet harvest from the main channel of the Columbia River but allowing it in off-channel areas. Oregon’s Fish and Wildlife Commission voted 4-2 on December 7 to adopt the plan, which also reallocates Columbia salmon to sports fishermen and calls for the development of alternative gear (such as seine nets) rather than gillnets. The Oregon plan will take effect in January of the new year, and will be decided upon by Washington’s Fish and Wildlife Commission mid-month.

So before 81 was actually voted on, it became null and void.

Groups in favor of the ban included heavy-hitters like the Humane Society and Wild Oregon. These groups claimed that gillnetting goes against the sustainable practices that have become iconic of Oregon. They also make the point that gillnets harvest indiscriminately, damaging not only salmon, but anything else that swims into the contraption, including mammals and birds.

Those against the ban included the Oregon Restaurant and Lodging Association; Lindsay Ball, former director of the Oregon Department of Fish and Wildlife; and many academics in the fisheries and wildlife sector, including some former Oregon State University professors. Opponents claimed that Measure 81 would create polarity in an environment that requires cooperation and collaboration—and that sustainability is impossible unless all forces are working towards that goal. They claim that it’s not right to place all the burden of salmon population decline on commercial fishermen, especially since in recent years record numbers of salmon and steelhead have travelled up the Columbia River to spawn.

While Measure 81 was essentially made defunct, it did bring to light an important issue, and re-opened a crucial dialogue. Here, local opinions range from the belief that tribal anglers deserve no special treatment (and that all gillnetting should be banned), to the idea that Measure 81 hurts commercial fishermen and Oregon’s economy, and to the opinion that Measure 81 is just a ploy by recreational anglers to acquire more fish for themselves.
All of the above arguments—and many others—are valid, so the question becomes: Is banning commercial non-tribal gillnet harvesting an effective way to increase the size of salmon runs in the Columbia River, helping Oregonians and salmon at the same time? The answer is probably not.

If anything, a reduction of recreational harvest and a stagnation of commercial harvest would allow more fish to travel upriver. Harvest gets a lot of press and attention because it’s something very palpable—obviously, it’s impossible for a fish to reproduce if it is caught on its way to do so. However, there are too many other issues at play to say that harvest—commercial or recreational—has the most significant bearing on population numbers.
Instead, a collaborative, long-term approach to Columbia River salmon conservation and population sustainability is necessary. Ocean conditions, riparian water quality, and dams are three prime examples of threats to Pacific Northwest salmon populations, and all pose a much greater threat than harvest.

This is great news, but it’s important to remember that long-term averages are far better indicators than record years. There are still 13 threatened or endangered Columbia River (and its tributaries) salmon/steelhead runs. These fragile populations are being affected by warmer river water, difficult dam passage, ocean acidification, cyclical ocean and river conditions, and unknown adversity brought on by climate change.

Simply put, the salmon that run up the Columbia River need to have the deck stacked in their favor; they cannot handle anything but the best of all scenarios every year. So does banning a regulated harvesting practice that has been in place for decades seem like a solution to the population decline of Columbia River salmon? Or is it perhaps just a Band-Aid, fixing a symptom instead of the underlying problem