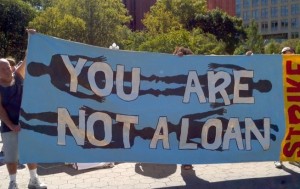 Anyone who’s been waiting for Occupy Wall Street to accomplish something of significance: your wait is over. The group has come up with a scheme to eliminate millions of dollars worth of distressed debt, in other words, debts that the agencies have pretty much given up hope of ever collecting. These loans can be purchased on the cheap—think pennies on the dollar—from banks and other agencies. Occupy’s Rolling Jubilee movement aims to purchase as much of this debt as it can, and then simply write it off.

Since its Nov. 15 launch, the group has raised almost half a million dollars, which it claims is enough to write off almost $8.5 million in debt. According to the group’s website RollingJubilee.org, it doesn’t have the ability to pay off student loans. The debts it does buy, which include unpaid medical bills, are purchased in packages of anonymous accounts. “Think of it as a bailout of the 99 percent by the 99 percent,” the website states.

Occupy admits that the Rolling Jubilee isn’t a solution to America’s debt crisis, but it is a step toward resolving part of the problem and a way to highlight what the group calls a scandal by Wall Street. Whether you think that debt is a problem incurred by individuals making poor choices or a result of a broken system, the statistics are clear: One in every seven Americans is currently being pursued by a debt collector; 77.5 percent of American households are in debt; and 62 percent of all bankruptcies are caused by medical illness. As for how much debt this movement succeeds in writing off, well, that will depend on how much of “the 99 percent” gets behind the movement.