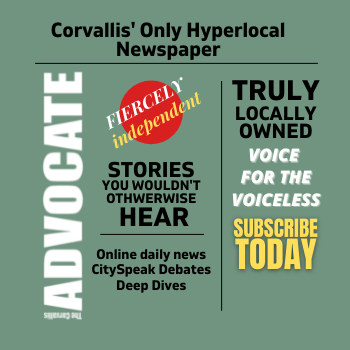 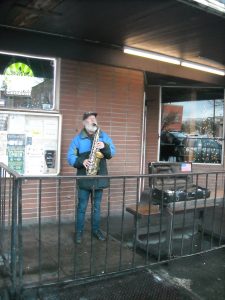 Let’s take a walk from The Advocate’s office near Madison Plaza, or as I still think of it, the old J.C. Penney’s.

Heading down Madison toward Fourth Street, the restoration of the Whiteside Theater is continuing. If you look north along Fourth, you can see an odd circular hatch in the Whiteside’s flank. It’s welded shut now, but clearly it was once the entrance to a chute of some kind, running down into the theater’s basement. You can easily picture taking hold of that hatch, pulling it loose, and . . . what? Sliding down it if you were an adventurous (and slender) child, perhaps, but what was it really for?

Was this the coal chute for filling a coal bin to feed the furnace that heated the theater? Close, but not quite. What went down this chute, filling a bin in the basement to later be shoveled into a furnace, was actually sawdust.

After all, coal would’ve had to be shipped in from the east, but the lumber mills in Philomath were generating more sawdust than all the sawdust heaters in Corvallis could burn. And there were plenty of sawdust heaters, big ones beneath big buildings like the Whiteside, and small ones for the home. There’s a small echo of the sawdust heaters in the modern pellet stove, but as gas and electric heating became cheaper, sawdust burners were shut down and removed one by one, long before the sawmills closed. 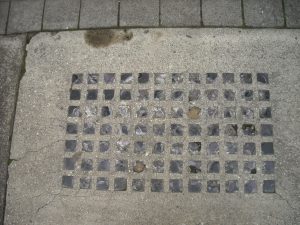 Speaking of what’s down below street level, in many locations downtown you’ll see square blocks of glass have been set in the concrete in checkered rows. Sunlight has passed through them for so long that they’ve turned purple, but that just means they’ve been doing their job: sending light into the basements of shops and other downtown buildings.

Something else you’ll see all over downtown are big metal doors that are almost never opened.  If you ever do see one opened, you’ll get a rare glimpse of a freight elevator raised to street level to collect products for basement storage, or perhaps old stuff being removed from decades-long storage in a basement.

But let’s not turn onto Fourth Street. Instead, let’s continue down Madison Avenue, with the Whiteside to our left and the Book Bin on our right. The Book Bin is an important commercial and social center in our community, but it’s not much to look at architecturally. It’s really a shame that our magnificent Victorian combination City Hall / Jail / Fire Station was torn down in the 1950s for the department store whose building now houses the Book Bin.

At the corner of Third and Madison, we come to one of the most beloved pieces of public art in Corvallis, and also one of the most practical: “Cassie,” the bronze dog sculpture, and her bronze water dish sculpture. While the statue of a dog is not actually a dog, the statue of a water dish really is a water dish. The living dogs of Corvallis are grateful for this fact, even if the philosophical ramifications escape them.

Now let’s turn onto Third and go over to Monroe Avenue before we continue down to Second Street. That way, we can take in the colorful fish mural on the Environmental Center, and the tiled facade of Squirrel’s Tavern. We might catch a street musician playing there, or in front of the Peacock.

There’s another nifty mural at the corner of Second and Monroe. The Grateful Dead-style dancing bears are easy to spot, but you might not notice that the door next to them isn’t a door. When is a door not a door?  When it’s a really, really lifelike painting of a door.

Turn south on Second, go back to Madison, and you come to the impressive cream-colored old Oregon State Bank building. Along the Madison side of the building is a railing enclosing a strange pair of staircases. You’d never know it to look at them, but they are the former men’s and women’s entrances to the Turkish baths in the basement of the bank. I don’t know – I might feel uncomfortable sitting in a steam room, knowing there were respectably-dressed people engaged in banking business upstairs – not to mention feeling uncomfortable banking, knowing there were a bunch of naked sweaty people downstairs. Let’s continue south on Second.

In front of Magenta is a strange sidewalk slab: why is there an outline of a rifle imprinted there, and the letters HODES…? As it turns out, the location which is now Magenta was once Hodes’ Gun Shop. You know, it’s a really nice-looking imprint, even after all these years. If I were ever to open a book store or a tea shop or something at 137 SW Second Street, I think I’d call it Hodes’, or maybe Hode’s, and give it a gun theme, just to absorb the decoration.

Continuing on to Jefferson, we pass in front of the Post Office. It’s a big, handsome Post Office. It was built in the 1930s, in a style commonly associated with the Works Progress Administration. The WPA was a Federal employment program set up by President Roosevelt after he took office in 1933, which put up government buildings all across the county. But if we look at the cornerstone, we see that it was built in 1931, when President Herbert Hoover – supposedly the “do-nothing” villain of the Great Depression – was in office.

If we cross the street to the West side of Second, we can look in the store window of the Corvallis Cyclery at the corner of Second and Adams, and see a plaque which tells us that it’s the former site of the Oregon Territorial capitol building. The Capitol itself is long gone but don’t be sad – I’ve seen pictures, and it was nothing much. Crossing Adams, we see a small rectangle of old concrete which says ADAMS ST. set into a much newer slab. A piece of the old sidewalk has been preserved when the new sidewalk was poured, but why don’t we mark sidewalks with street names these days? And why don’t contractors put their names and the date that the sidewalk was poured on their work? I think it’s a shame that the only dates we see on sidewalks are from the 1910s and 1920s.

Passed that slab, we stroll in front of Robnett’s hardware, and see metal rings set into the pavement, held there by metal staples. They’re hitching rings to tie up horses and horse-drawn carts. That’s how old the curb in front of Robnett’s is. That’s how old Robnett’s is, for that matter: it’s nearly a hundred years young, still owned by the Robnett family, still in the same location, still with the same oiled-wood floorboards and rolling ladders. You can still find almost anything you need to for home maintenance at Robnett’s, too.

That reminds me, I need to buy a gornickle, so I’d better stop in here to get one. Looks like today’s tour is coming to an end. Perhaps I’ll see you again for another historical stroll in Corvallis.