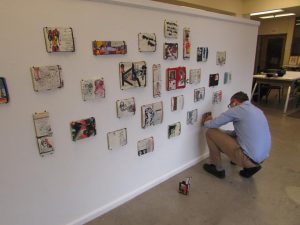 They say some suffer for their art, but what about suffering for someone else’s art?  I rolled up to CEI Artworks a couple Fridays ago, after a few hours on the road while still pregnant with Thanksgiving. The plan was to check out Phillip March Jones’ WORKBOOKS exhibit in depth; I had the pleasure of meeting him a couple of weeks back when he came and spoke with my cohort at Portland State University, but his list of accomplishments as a curator and arts administrator is so long that we didn’t get much time to discuss his artwork. In fact, if you search Jones up on the Internet, you’ll find nothing but a string of interviews, articles, and his website – the latter of which mysteriously only offers up a photo of an inflatable bear.

For some perspective, the now New-York-based Jones founded the non-profit contemporary art space Institute 193 in Lexington, KY, was the first director of the well-known Souls Grown Deep Foundation, and is set to co-curate the upcoming Atlanta Biennial. Assuming you’re unfamiliar with Souls Grown Deep or Institute 193, I invite you to check both of them out, as their impact, particularly on the preservation and celebration of southern African American art, is the very definition of noteworthy. You can find more information on them at http://www.soulsgrowndeep.org/ and http://institute193.org/, respectively.

As I arrived at CEI Artworks, I walked up to the door and found it locked. The lights are off. Suddenly, it dawned on me that most people actually take a minute to enjoy themselves and their family for the holidays, but I wasn’t going to let a locked door, the cold, or the rain stop me. I pressed my face up against the glass, mostly undefeated (my apologies to whoever had to clean it).

While I came into this knowing that Jones’ workbooks were part of a very long-running project (15 years!), and that notebook art is a little ubiquitous at the moment, I was immediately gripped by the diversity and strength of his mark-making. Nothing is forced, but given the exact amount of time it seems to have wanted. Abstract creatures, collage, text work, and mixed-media studies in a variety of palettes. Jones tells me that he didn’t originally intend for this work to be exhibited at all, which seems clear in its novel execution. In at least one image you can even see someone’s phone number just chilling there, uncensored.

The most immediately gratifying part of the experience is that it felt like a psychic invasion on my part. After all, it’s not often one is granted unfettered access to a truly personal space. This seems to be especially true in art, where the facsimile is often the name of the game.  As to what portion of this work was made before or after the decision to show it is not something I can attest to, but there’s no sign of stage fright or concoction in any of it.

The work, which was arranged in an amorphous cluster on the main wall, notably didn’t seem like it would suffer from the loss of a single page any more than it might with the addition of one. Each piece was very strong and could have easily commanded a whole wall to themselves, but also functioned incredibly naturally as a group. If you look closely, there’s a lot of history to witness in some very small spaces, and I believe this would translate well to a number of different ways it could’ve been installed. Having a sick fascination with both modularity and continuity, this was one of my big personal takeaways.

One particularly unscratchable itch about the exhibition came from noticing that these were not just selected pages hung on the wall, but entire notebooks with just one page on view. There’re literally hundreds more that one can’t even access, which is pleasantly torturous. There’s also something about the thickness of the objects that make them feel a lot more sculptural and complex than your standard two-dimensional fare. Perhaps a gross metaphor, but there’s a lot of meat on those bones.

While it’s definitely wonderful to have a notable artist like Phillip March Jones pay Corvallis a visit, the reason you should take some time to enjoy this exhibit has little to do with his accolades, or even the fact that he has proven himself incredibly generous with his time and resources. You should take some time out of your day to pay WORKBOOKS a visit simply just a really great collection of work. Believe me when I say that will be enough.

WORKBOOKS runs at CEI Artworks (408 SW Monroe Avenue, Suite 110) until December 17. The Gallery is open from 11 a.m. – 5 p.m. weekdays, though if you’re there outside of those hours you’re welcome to press your face against the glass.