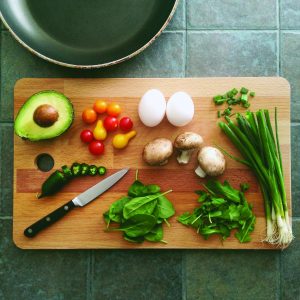 Over 40 years ago this April, Joni Mitchell released her single, “Big Yellow Taxi;” we all know the lyrics: “They paved paradise to put up a parking lot,” and multiple artists have remixed the song since its release, but its message still rings true today. The song became an anthem for environmentalists, conjuring troubling imagery of the near future.

In some ways, our challenge to preserve the environment has grown with a burgeoning population and a quicker rise in carbon than our environment has ever experienced; causing the climate to change and carbon’s cumulative effects still to be seen in the coming decades. So, with an eye to Earth Day coming up on April 22, let’s visit a crucial aspect of environmental stewardship that we all rely on: our food.

What foods we consume may seem insignificant compared to our car sitting in the driveway or planes flying overhead, but the reality may be somewhat shocking. According to the Intergovernmental Panel on Climate Change, a scientific and intergovernmental body as well as one of the most widely and highly respected authorities on climate change, agriculture is responsible for 10 to 12 percent of total human-caused greenhouse gas emissions. What’s more, it causes almost a quarter of the continuing increase of GHG emissions, with industrial agriculture leading the attack.

However, many communities, including Corvallis, are starting to move towards a more sustainable way of eating and living that would cause significantly less damage to the climate.

According to Rebecca Fallihee, a member of the Food Action Team for the CSC, “The Team aims to increase the consumption of locally and sustainably produced food, encourage personal connections between farmers and consumers, support energy-efficient home gardening, and ensure that all community members have access to quality food.”

Fallihee, with a lineage of agricultural roots, grew up on a ranch in Eastern Oregon and has two degrees: one in agricultural sciences and another in agricultural education. She has been teaching agricultural, food, and nutritional education for the past eight years, and brings that experience to her role as a member of the CSC’s Local 6 Connection.

The Local 6 Connection is “one arm” of the Food Action Team, and its goal is to “increase demand and overall consumption of local food,” Fallihee stated. They organize the annual Local Eats Week in the fall as well as the Eat 40 Percent Local Challenge and distributing seasonal, bi-weekly recipes among other projects.

“I have the rare ability to say that all of my closest family members, and even most of my extended family, are still actively employed in either producing food, or in an occupation that assists other farmers” Fallihee said. And that is no small feat.

In the late 1700s, farmers constituted more than 90 percent of the labor force, now they constitute less than 2 percent. But as awareness rises, so are small, local farms and farmers who have a much smaller impact on climate change than their industrial counterparts.

Transporting Food Across
the World
Fallihee explained that “In our current food system, it takes 7 to 10 calories of fossil fuel energy to produce 1 calorie of food. Much of that energy is used to produce chemical fertilizers and transport food products around the world.”

When considering carbon footprint, or how much carbon dioxide an individual is emitting into the atmosphere, transportation is often blamed as a key culprit for high emissions, including when we consider food consumption. The amount of carbon emitted from growing an orange in New Zealand and then shipping it all the way to our local Trader Joe’s is a lot of carbon compared to an orange from Arizona, or better yet, a local fruit bought in-season.

However, Fallihee explains that calculating how carbon-intensive a food tends to be is more complicated: “When I first began learning about food systems, the idea of food miles was a big topic, with the belief that food that comes from far away has a bigger ‘footprint,’ from all the resources involved in transporting it from a great distance.”

She explains that, “more data has come out in recent years to show that it’s not so much the miles that a food has undergone, but the types of resources that were used to produce it, like chemical fertilizers, pesticides, etc. as well as the on-farm practices that a farmer might be using. In effect, the more ‘closed-loop,’ biodynamic and regenerative a farm is, and thus less dependent on factors that lead to carbon emissions, the better.”

She added the caveat that, “While this is a broad statement and not always true, small farms or gardens tend to be using fewer resources that contribute to our carbon footprint, and/or the food is coming from someone we know, and we can ask what their practices are, as well as share with the local producers the values we, as customers, are seeking.”

By using dollars and conversations as votes, individuals dictate what stores, farms, or businesses flourish as well as what products they produce, and what methods they use to produce their goods.

Plant-Based Diets
When considering other methods in reducing individual carbon footprints, it’s just as important to consider foods that require fewer calories to produce as it is to buy local.

Taking a lower-carbon approach to grocery shopping is not only better for the climate, it’s also better for general health according to Fallihee.

“The more plant-based one’s diet becomes, the better it is for the environment” Fallihee stated. “eating more unprocessed or minimally processed fruits, vegetables, whole grains, beans and legumes, seeds, and nuts is, unsurprisingly, a diet that is also best for human health, disease prevention, and longevity.”

Corvallis’ Climate Action Plan aligns with the Sustainability Coalition’s goals as well as climate scientists who know that “a general shift in food consumption toward an increasingly plant-based diet can reduce greenhouse gas emissions generated by the meat and dairy sectors, which are significantly more greenhouse gas producing than plant-based agriculture.”

Fallihee adds an important reminder that sustainably produced meat and dairy generally have a lower carbon footprint than their industrially-produced counterparts, but that additionally, “ruminant animals like cows, sheep and goats are less efficient in using their feed to create edible meat when compared to poultry and pigs.” So, pound for pound, animals like chickens and turkey will yield more meat for less carbon.

Gardening’s Role in Carbon Output
Mark McGuire, the director of Bountiful Backyard, a 501(c)(3) nonprofit, is a member of the CSC’s Edible Garden Group, another branch of their Food Action Team.

The Edible Garden Group is “commissioned to empower local agriculture that renews and enriches the land and community.” McGuire explained that they facilitate tours of local food productions, distribute a Corvallis Garden Resource Guide, and are posting Neighborhood Planting Kiosks throughout the city “where neighbors may display garden-related info on their property.”

Harking back to Fallihee’s statements about the importance of knowing how food is produced when considering its impact on the climate, McGuire said that “the carbon footprints of individual gardens are entirely dependent on how food production is managed. For example, in order to feed their soil nitrogen-rich nutrients, one may drive to the garden store to purchase ammonia fertilizer shipped from a chemical company, while another may bicycle to their neighbors to collect compost of green clippings.”

Instead of focusing specifically on where the food came from, he explains that it is equally as important to consider the practices that brought the food into being.

“The best foods people can eat are those that involve both plants and animals, managed in a way that builds up healthy soil,” McGuire began. He started with an example of a cow, “which may produce 370,000 Calories (kilo-calories) of meat, but at the same time produce over 7,000,000 Calories as manure. In a responsibly-managed system, such as a small pastured operation, the cow’s manure (which has a greater environmental – though a lesser economic – impact than its meat or milk), is a renewable resource. The primary producer [cow] serves its function as a soil builder, with the secondary function of meat or milk production.”

“Healthy pastures sequester generous amounts of carbon, with a deepening topsoil layer from year to year,” McGuire continues, “incorporating perennials, cropland will shed as much root mass as is taken from above ground. Though some nutrients are taken away from the system as food, with constant energy input from the sun through photosynthesis, plants convert carbon into sugars and then those sugars into biomass.”

McGuire’s example demonstrates how a carefully managed farm can reuse manure to make a healthy pasture that will then require less chemically-produced, carbon-intensive soil and nutrients, resulting in a more sustainable and climate-friendly meat.

Unfortunately, those practices require more time and care than many industrial agricultural businesses wish to spend. “Industrial agriculture is mining our soil banks” or stripping them bare, McGuire explained, making our available soil “measurably shallower than years previous, and this releases carbon into the atmosphere.”

For that reason, among others, McGuire said, “the worst types of foods that people can eat are animal products from large-scale, industrial farming operations.”

Fallihee also mentioned other farming techniques that reduce the carbon emitted in farming operations: “leaving soil untilled and using cover crops and compost to enrich the soil can lower or eliminate the need for fertilizers. Also, using water-efficient gardening practices can also cut down on energy use since it takes a lot of energy to pump, treat, and deliver water to your garden.”

As a final thought, McGuire added that sometimes technology causes more harm than good, as in the case of food production: “I would caution folks regarding “solve-all” technologies… With the advent of electrical tools and precision agriculture, it is easy to become infatuated with these “solutions;” however, there are factors injuring our planet beyond carbon emissions, including the mining and waste from excessive techno-gadgetry; and it can be shown that there is no greater efficiency than direct human and animal labor: elbow grease.”

Climate-Friendly Eating Out
Eating fast food will almost always be a bad idea when considering carbon emissions, as the majority of fast food operations purchase their product from industrial farms who use the practices mentioned above.

Elaine Fowlkes is a Community Food Educator partnered with the Corvallis Environmental Center and the Linn Benton Food Share. She teaches people how to make healthy meals with the ingredients they find on shelves at food pantries. Some local farms donate produce to the pantry, making the available foods more nutritious and sometimes more daunting. That’s where Fowlkes comes in.

“My goal is to empower people to cook at home rather than buy fast food meals,” Fowlkes explained. “That, in and of itself, is a significant way to reduce a family’s carbon footprint.”

Receiving her B.S. in Botany and Plant Pathology from Oregon State University and then working for the local Gathering Together Farm, Fowlkes has been connecting people to local food sources for years.

Folkes explains that “by cooking and eating at home, people reduce travel time to restaurants, the packaging and trash associated with fast food, and of course, the health challenges that result from eating too much unhealthy food.”

But if you still want to get out every so often and not have to do dishes, Corvallis has plenty of options. The Local 6 Connection works with around 15 local restaurants for their Local Eats Week, and many of those restaurants create primarily locally-sourced dishes that they offer on their menu year-round.

To receive Simply Seasonal Recipes, read about energy-efficient gardening, and find out more about the CSC’s Food Action Team, go to https://sustainablecorvallis.org/action-teams/food/.